(3) Discovering the World in One Pair of Pants 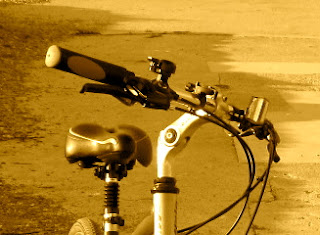 CHAPTER THREE   -   About motorcycles and ointment

I left my motorcycle in storage this year so that I didn’t have to pay to insure it because I’m trying to save money for an important trip to Scotland. (A museum, built after World War II and dedicated to soldiers, sailors and airmen involved in Combined Operations (e.g., my father, a member of RCNVR) is found in Inverary).

Some will soon say, however, my ability to save money is a lot like my ability to pack light, i.e., it’s a work in progress, because the $700 I saved on insurance this year I used to purchase the Miele bicycle I rode to Port Bruce, as well as the CCM trailer I hauled behind it.

Thanks to recent purchases of bicycle accessories I’m actually in the hole. However, if I sell my motorcycle next spring I’ll be way ahead in the savings department. That is, if I sell it. (“Scotland, here I come?”)

I thought about my motorcycle a lot during the bicycle trip. Every time I felt the trailer tug at the back of the bike - almost every ten seconds, especially often on uphills - I thought about how much easier were past camping trips when I strapped all my gear to the back of a Suzuki or Yamaha. 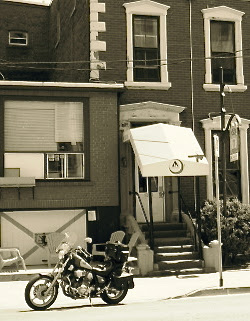 Every time I felt the sharp strain of a leg muscle or the dull ache of my hinder parts I thought of the lovely 1100cc Yamaha Virago sitting in storage. Every time I saw another hill - short, medium, long; they were everywhere - I thought of my motorcycle’s reliable motor.

I asked myself several times, “What was I thinking?” 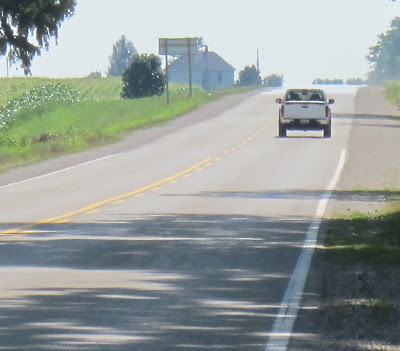 [“It seems all uphill to Pleasant Valley Rd.”]

But for every uphill there is a downhill (never of equal length in my mind) and for every negative thought there is a positive.

For example, after passing Jaffa Road, two miles north of the historic village of Sparta, I climbed - slowly, on legs beginning to cramp - toward Pleasant Valley Road and recalled the moment several years ago when two golden eagles passed silently over my shoulder while I motorcycled toward the narrow bridge at the base of Pleasant Valley. I sensed the presence of the gliding eagles before I saw their shadow upon the ground. Hair raised upon the back of my neck. It seemed the sky grew dark, and when I lifted my head I saw the pair pass above me 15 feet away. Though I shivered for a few seconds at the thought of them carrying me easily (Maybe not ‘easily’. I do weigh a lot more than a baby sheep.) to some distant aerie for lunch, I was happy to be afforded such a good look at such rare and majestic birds.

And during this bicycle trip I wrote the following about Pleasant Valley Rd.:

(It) may lead to a pleasant valley but it felt great, for the most part, to coast easily into Sparta on the downhill side.

I suppose I said “for the most part” because my legs were tired and my rear end was numb. I took great pleasure in standing up on the pedals and airing out my shorts for half a mile. And thank goodness one can buy ice cream at Sparta’s one gas station. 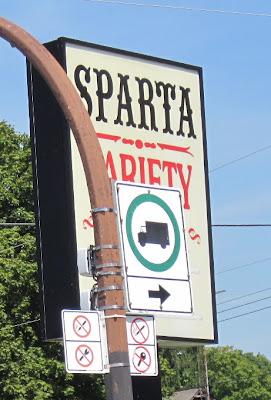 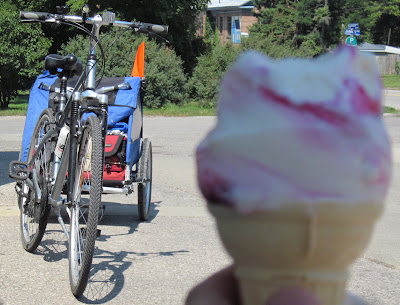 [“New York Cherry Cheesescake - all for me!!]

Had the gas station sold soothing ointments I would have sat down in a bucket of their best, but the cold ice cream helped me forget my aches and pains for a few minutes at least. As well, the short break set me up nicely for my last hour of pedaling for the day. I was on Dexter Line inside of 20 minutes and soon thereafter snapped my first views of Lake Erie. And it wasn’t long before I flew down a steep hill into Port Bruce to receive an unexpectedly cold welcome to my campsite for the weekend.

Please join me here again for more ‘Discovering the World’ and ‘Photos from along the way’.

Zoom w a View: “Another way up”

It seemed every time I finished hauling the trailer up one hill there appeared another. 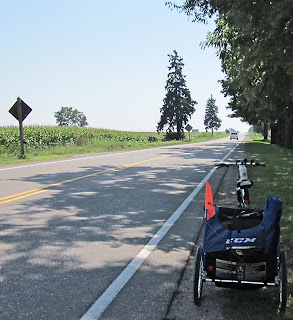 Did the journey to Port Bruce ever end?

Yes. About five and a half hours after it began.

Please click here for more photos from along the way.
Posted by G. Harrison at 6:04 AM No comments:

(1) Discovering the World in One Pair of Pants

Round trip by bicycle: London to Port Bruce, Ontario. 125 km.

“Cycling with too much weight is hard work”

Why ride a bike over 60 kilometers to an almost-forgotten old fishing port I’ve visited one hundred times already? Good question.

Why not? It’s guaranteed to be quiet, peaceful and several flavours of ice cream are sold at the Sand Kastle restaurant. Good answer.

[The beach at Port Bruce]

I’m a willing traveller who likes to pack (often too much), unpack, take walk-abouts and scores of pictures and talk to complete strangers when I’ve had enough time playing quiet observer. I like learning a few new things each day away from home and then packing up for the return trip.

I like trying to pack light (one pair of pants) and hanging onto my money. My favourite souvenirs are rocks, tans and photos.

A few days ago (August 24) I bicycled to Port Bruce in order to camp for three nights, read at the beach and enjoy a King Burger at the Sand Kastle. Now that I’m home, and after much careful thought and several complicated mathematical calculations (including one Venn diagram), I give the trip a score of 8 out of 10. 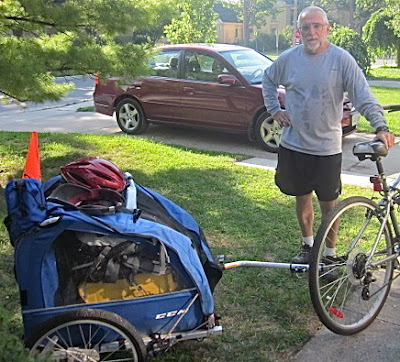 [Miele bike, CCM trailer and me, ready to go]

About the score: The weather was great, I couldn’t ask for better, I felt my bones relax, and though the broken sign that read “Are Strictly Prohibited On The Beach” probably referred to Alcoholic Beverages, the first cold beer I drank under the spreading arms of twin scrub trees tasted absolutely great. And if it was illegal then it tasted even better. However, a few snags appeared along the way, as did the cold nose of a frisky dog - almost inside my shorts - when least expected.

Please join me below for CHAPTER TWO and more PHOTOS FROM ALONG THE WAY.

Discovering the World in One Pair of Pants 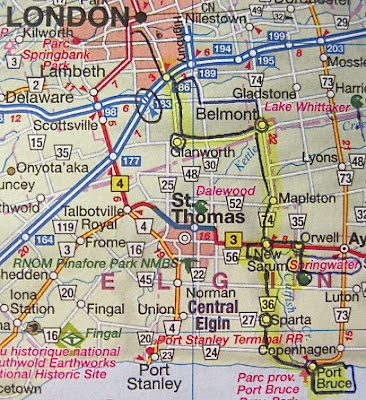 I left my house and my anxious wife (“What will I do with all my free time, now that he’s gone?” she wondered.) at 9:45 a.m. on Friday, the 24th of August, and headed to a nearby bike shop to buy pedals with toe clips, but I found it was closed, so I past some time by pumping up the tires on my bike and heavily-loaded trailer, and tapping my feet.

In all I waited about 15 minutes but couldn’t wait any longer because the thought of riding 60 kilometers weighed heavy on my shoulders, as did the extra pounds of gear I had behind me... compared to a similar trip earlier in the summer. (My large can of Irish Stew with its ‘preformed chunks of meat’ alone felt like five pounds of excess cargo during the first two blocks of pedaling. I decided to keep it on board anyway, along with a lot of other stuff I used once - or not at all - during four days of camping. My packing skills are a work in progress).

“Forget about the pedals,” I said and headed south toward Bradley Avenue, Pond Mills and Wilton Grove Roads. They led me to my favourite route south to Lake Erie, i.e., Old Victoria Sideroad.

Though Old Vic has a few sections still in gravel (the road isn’t called ‘Old’ for no good reason), the hard-packed dirt is a decent ride and the lack of traffic is a welcome relief. When motorcycling to Port Bruce in the past I often used the road at low speed for sight-seeing. I once spotted elderberry bushes in bloom and another time wild turkeys on the run - nearly 50 miles per hour it seemed - in harvested corn fields.

On this day I found it closed due to construction. 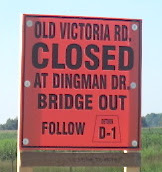 [My favourite route is closed]

“Darn it all,” I said, though not politely. “Now I’ll have to take the Belmont Road to New Sarum (on Highway 3).”

On the plus side I would have all paved roads. On the minus side I would have heavier traffic, more noise - compared to birds - and less solitude. And I like solitude. I like stepping off the bike in quiet spots and listening to the wind in the willows, chirp of golden finches and quietness of wide open spaces. 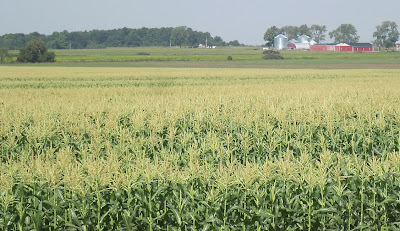 [Sometimes, on a quiet day, I hear corn grow]

Not today, I thought. At least, not until I get to Quaker Rd. south of Highway 3.

My trip diary - it’s always close at hand - records the following: I continued east (RATS!) on Wilton Grove Rd. = busier, w chewed up shoulder. Belmont Rd. was OK w shoulder and I arrived in Belmont @ 11:50 but pressed on (w 2 major hills) to Mapleton. Made good time so settled on lunch under a shady tree @ New Sarum Diner @ approx. 12:45.

According to my well-organized ‘camping menu’, which I kept on a separate piece of paper in my wallet (close to my money, as if to say, “Go easy, man. Stick to some sorta budget”), I planned to buy myself, as some kind of reward for endurance, a nice lunch at the New Sarum Diner, the home of ‘four-penny cheese’ in the not-too-distant past.

[I planned every meal. But didn’t stick to it!]

But my wife had packed a lunch for me so I relaxed in the shade outside the diner, stuffed my face for free and put the frustration of the detour behind me. 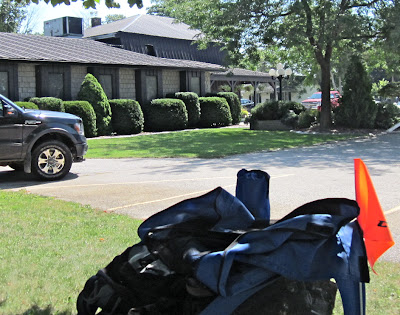 [In the shade, outside the diner]

Note to readers: I wrote a column in The Londoner (London’s finest community newspaper) several years ago re the New Sarum Diner and their world famous ‘four-penny cheese’. If it wasn’t world famous then, it is now.

When I find a link to the actual column I will provide it. I’m sure you’ll enjoy it!

Please click here for more PHOTOS FROM ALONG THE WAY.

(2) Discovering the World in One Pair of Pants

PHOTOS FROM ALONG THE WAY

Round trip: London to Port Bruce 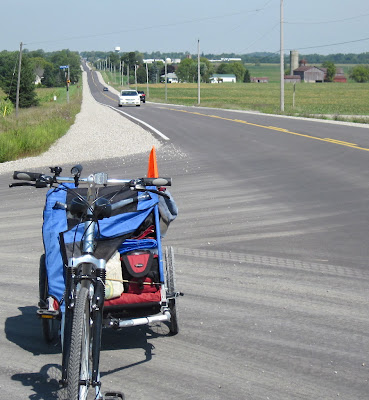 “I stopped several times for water and butt breaks.” 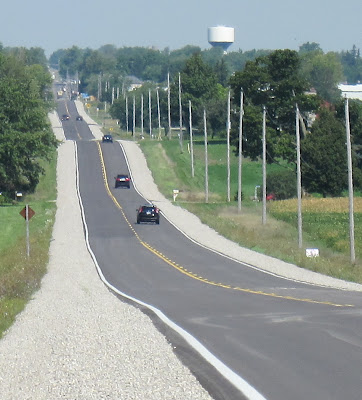 “I wasn’t kidding about the hills. Tough sledding.” 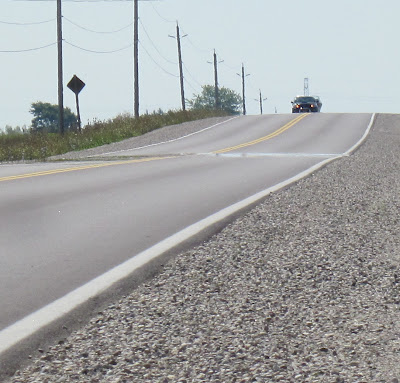 “Biking uphill would be easier with less weight in the trailer! And on a motorcycle!” 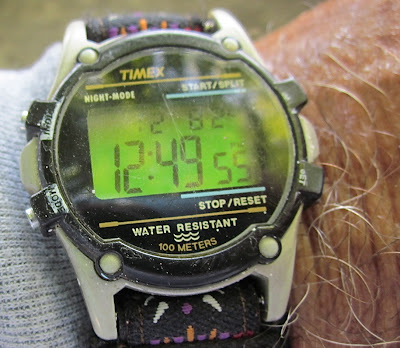 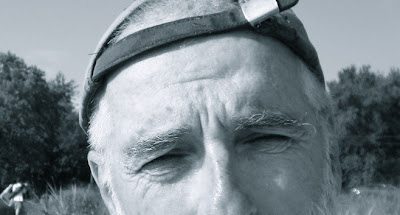 “My first view of the lake is over two hours away.”

Please join me here for CHAPTER THREE  and more PHOTOS FROM ALONG THE WAY.