My dad joined the Royal Canadian Navy Volunteer Reserve (RCNVR) in 1941 and put his shoulder to the wheel of World War II.

In his Naval memoirs he writes the following:

March the first, 1941, I left my employment at the Norwich Co-op and joined the Navy as a probationary rating, at Hamilton, taking instructions each evening. I stayed at the home of my sister Gertie... (“DAD, WELL DONE”: The Naval Memoirs of Leading Seaman Coxswain Gordon Douglas Harrison)

He said good-bye to his job at the Co-op in the west end of the village of Norwich as well as to his mother (his father died when he was 10), brothers and sisters and a girlfriend, a young girl who lived in a small house under the village water tower, one block from the post office in downtown Norwich. 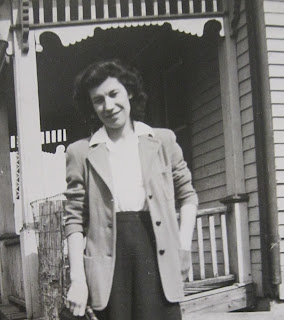 [“Edith Catton (later, my mother)
outside her small house, Norwich”]

I’m sure it wasn’t long before letters between Dad, his mother and his girl friend flew back and forth, all expressing feelings about new experiences, strong affections and their separation from one another. 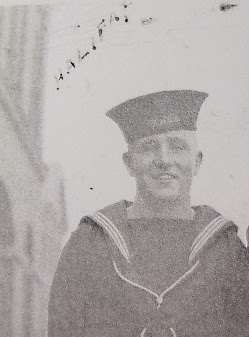 I’m also sure it’s true that ‘absence makes the heart grow fonder.’ In the recent past, as I compiled my dad’s naval memoirs into book form, I learned he and many other young men missed their mothers and girlfriends greatly and couldn’t sing certain songs without tears forming in their eyes.

As well, I learned that affectionate alliances were formed between many young Canadian sailors and women in Great Britain during the harsh war years, and that the attractions and affections - even after the men and women returned to their own homes, friends and families - lasted long after the second world war ended.

A short story follows about an alliance my dad made when in England in 1942, the effects of which can be felt to this day.

[Photo of old photos by G.Harrison]